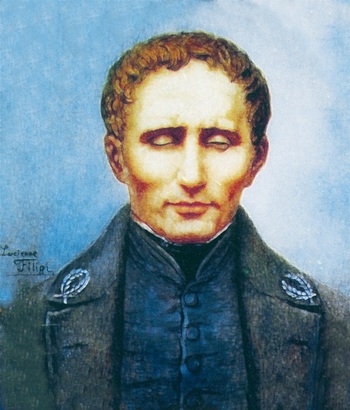 He invented the system of reading and writing for the blind or the visually impaired. Known as the Braille system, it is widely used in many institutions, unchanged to this day.

Himself blinded since a childhood accident, he was able to work through his disability and worked as a professor and spent the rest of his life refining and extending his writing system. The system wouldn't be used widely until many years after his death.

Braille died in 1852 at the age of 43 after contracting tuberculosis sixteen years earlier.

The Writing System He Invented

overview
Braille uses a system of raised dots arranged in a grid 2 dots wide by 3 dots high. A single such grouping of six dots is called a “cell”. These dots can either be raised or lowered to yield 63 unique combinations of dots per cell (64 if you count the cell with no dots raised.) Different characters of the Latin alphabet are given their own braille cells. This is about as far as you get whenever braille is presented to a sighted audience. At some point in your life you may have even seen bookmarks or other knickknacks with the 26 Latin letters and their braille equivalents, perhaps also including each letter’s corresponding hand sign in American Sign Language. And just like how ASL is far, far more complex then just finger spelling, braille goes quite a bit deeper than just the 26 letters of the English alphabet. Of course, an exhaustive treatment of braille is beyond the scope of this article, but we’ll try to summarize things in a way that makes further investigation easier should the reader so desire.

Right off the bat, you may be thinking to yourself, “64 symbols seems overkill. There are only 26 letters in the alphabet, after all.” But step back and think for a moment, what sorts of things does the term “writing” encompass? Braille has to use just those 64 symbols to represent, not just the 26 letters of the alphabet, but numbers and punctuation as well. Oh and let’s not forget letters can be either upper or lower case. And what about math? What about musical notation? What about letters with diacritics? And we can’t forget that not every language uses the Latin alphabet, and some writing systems have thousands of unique symbols. How on earth does Braille cram all that into just 64 cells?

At this point the more computer savvy reader may probably already have figured this out, but the truth is braille isn’t so much an alphabet as it is a binary character encoding system. And just like how context determines whether a computer should interpret, say, the sequence 0110 0101 as a printed character, the brightness value of a subpixel in an image, or a particular instance along the waveform of a sound file, braille uses context to determine what a given cell actually represents. Different languages reassign the 64 braille cells to fit their existing writing systems. Some languages need more work than others. Japanese and Mandarin, for example, completely abandon the thousands of characters used in their printed forms, and rely solely on phonetic representations of words. Mandarin uses a system similar to Zhuyin, while Japanese transliterates everything into Kana. Even within languages, however, braille has to reuse the same symbols for upper and lower case letters as well as numbers. A special symbolnote you might liken it to an escape sequence in computing lets the reader know to interpret the following letter as a capital, or even as a number rather than a letter. Braille also has methods for indicating bold, italics, and underlined text, as well as lots of stuff related to math and science. It also has separate systems for the International Phonetic Alphabet and musical notation, of course.

The last topic we’ll touch upon is space, or rather the lack thereof. Much like Chinese characters, a braille cell always takes up the same amount of space on a line regardless of how many dots are filled in. Furthermore, a braille cell has to be small enough to fit under a fingertip while being large enough to differentiate one cell from another. Thus, the exact dimensions of a braille cell are fairly standardized, and a single braille cell is much larger than a typical printed letter. A related problem is reading speed. The fastest braille readers can just about hit the lower bound of acceptable literate adult reading speeds for print. Both space and speed issues are addressed with a complex system of abbreviations called “contractions”. Certain common letter combinations, and even some very common words, get unique single cell forms. When written on their own, most single letters can stand for whole words. Other words are shortened to a few letters. Some other whole words, as well as a bunch of prefixes and suffixes, are given a single cell preceded by a special indicator. Lastly, those single-cell logograms can appear in the middle of words, so the word “mandate” ends up something like “m&ate”, for example. The result is something akin to text-speak, but this contracted form of braille is used everywhere, from books to elevator buttons to bathroom signs. Young children start out learning just the alphabet, numbers, and punctuation. This is called “grade 1” braille. Over time they are taught the contracted, or “grade 2” form of braille.Of course there’s way more to braille than this, but hopefully we’ve given you a better idea of how braille works than most sighted people have.