Film / When Knighthood Was in Flower 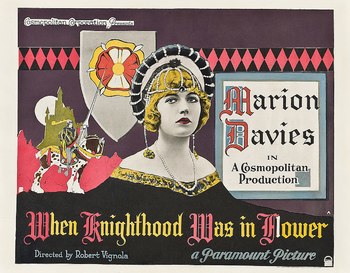 When Knighthood Was in Flower is a 1922 film directed by Robert G. Vignola, starring Marion Davies.

It is set at the court of King Henry VIII, and stars Davies as the king's sister, Mary Tudor. Vivacious young Mary is a highly sought-after marriage candidate both for her noble standing and her beauty. Her brother Henry decides to marry her to Louis XII, king of France, to cement an alliance between the two countries. There are a couple of problems with this, however. Mary is scornful of the idea that she is a pawn to be married off. She is particularly repulsed by the idea of marrying Louis, who is a doddering old man. And most inconveniently for Henry, his sister has fallen in love with Charles Brandon, a captain in Henry's guard. They are determined to be married no matter what.

Produced by William Randolph Hearst, Davies' paramour; the most successful of the elaborate costume dramas Davies made during this era. A 30-year-old William Powell, in only his second movie, appears as Francis, King Louis's nephew and heir (later King Francis I).