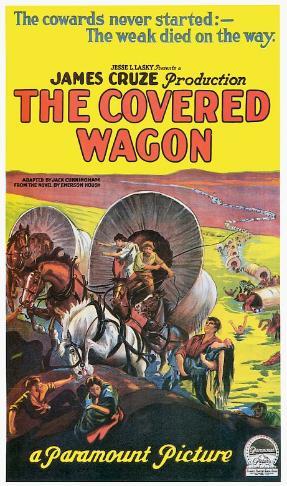 The Covered Wagon is a 1923 silent Western Epic Movie directed by James Cruze. The story was adapted from Emerson Hough's novel by the same name, released only a year earlier.

The plot concerns a group of pioneers who travel west on the Oregon Trail in 1848. Our hero is Will Bannion, a clean-cut, all-American veteran of the Mexican-American War. He comes with a sidekick in the form of Bill Jackson, a gruff and cynical frontiersman. Will's love interest is Molly Wingate, the wagon master's daughter. But the normal hardships of the trail are not their only problems. The villainous Sam Woodhull, second-in-command of the wagon train and Molly's Disposable Fiancé, is determined to destroy Will at all costs.

This was the highest grossing film of the year 1923, and was popular enough to inspire parodies like The Uncovered Wagon, The Covered Schooner, and Two Wagons: Both Covered. Additionally, President Warren G. Harding declared The Covered Wagon to be his favorite movie.

Like other films released in 1923, The Covered Wagon entered the Public Domain in 2019.