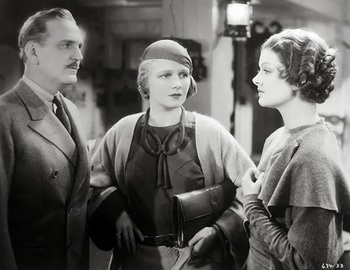 When ladies meet, the Love Triangle is revealed.
Advertisement:

Jimmie (Montogomery) is set on marrying his friend, and writer, Mary (Loy). But upon finding out that she’s having an affair with her publisher, Rogers (Frank Morgan), Jimmy concocts a plan to make Mary and Roger’s wife, Clare (Harding), meet.

The film was remade in 1941 with Robert Taylor, Joan Crawford, and Greer Garson; however, the frankness of the pre-code attitude is mostly gone.

When Ladies Meet follows these tropes: