Fanfic / A Breach of Trust 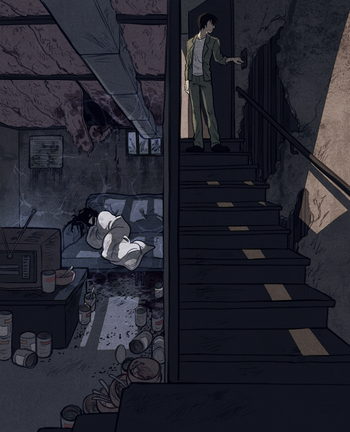 This is a world in which Mob and Reigen's paths have never crossed, in which 10-year-old Mob found psychic guidance in the form of the aging, retired tv personality Keiji Mogami, in which Reigen followed through on his plans to close the Spirits and Such Agency, in which a cruel twist of Mob's powers forces him to confront how dangerous he really is.
10 year old Shigeo Kageyama has vanished, his trail instantly cold, and his case gathers dust in police archives as a kidnapping never solved. Four years pass before a chain of events causes his path to cross with that of the despondent, unfulfilled fake-psychic-turned-fake-investigator, Arataka Reigen. Reigen finds himself in over his head caring for an escaped victim of abuse who, for reasons unfathomable, has been taught to believe his very existence is a horrifically dangerous thing…
— The fic's summary.

It features Mob and Reigen under drastically changed circumstances - Mob never came to Reigen for advice that fateful day. Instead, he's the victim of a four-year-long kidnapping and Reigen has become a private investigator for hire well on his way to becoming jaded with his line of work. That is, until a client walks in, asking him to tail her husband for fear of an affair...