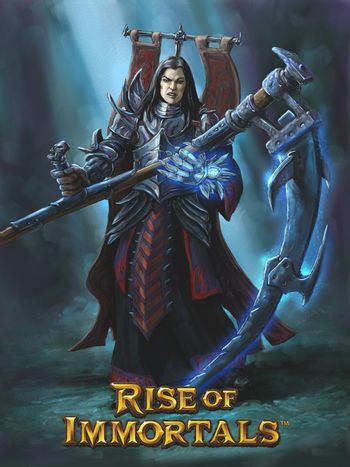 (or RoI), later renamed Battle for Graxia, was an online, free-to-play PC game running from 2011 to 2013 that expands on the hit Multiplayer Online Battle Arena (MOBA) genre with new, innovative features designed to appeal to both core and casual players. It is Petroglyph's (of the Command & Conquer and Universe at War fame) first attempt on the genre.
Advertisement:

Rise of Immortals was set in the world of Graxia, 300 years after the events of “Guardians of Graxia,” Petroglyph’s fantasy-based PC game released the previous year. Rise of Immortals featured the popular action-strategy gameplay of traditional MOBA games, but added enhanced socialization features, along with persistent character progression – a first for the MOBA genre. Instead of an account- based leveling system, players could advance their Immortals through a diverse, persistent skill tree, customizing and upgrading the characters to unlock unique abilities that persist from match to match.

In addition, Rise of Immortals featured a social hub where players could show off their enhanced Immortals, chat, emote, browse leaderboards, shop, manage friend and guild lists and more. Players also had the option of taking their Immortals through cooperative Player versus Environment (PvE) scenarios to learn the game, try out new abilities, and earn persistent experience before jumping into Player versus Player (PvP) matches online.

Players could purchase items via the in-game store to further enhance their Immortals, including new Immortal skins and consumable items like in-game boosters and elixirs. Petroglyph planned to release new content on a regular basis, including additional Immortals, arenas, skins, sound packs, pets and more.