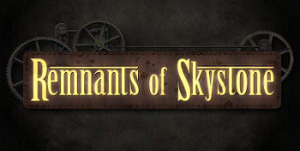 was a web-based MMORPG Platform Game that ran from November 28, 2008, to 2014 set in in a steampunk world where the ground has been covered by purple Haze hostile to the native life. Residing in this mist are creatures known as Mimics, which take on the forms of local flora and fauna. The people fled into the sky on a giant "float" known as Nidaria, and from their castle above they set their sights below, to retake the land that was once theirs.

That's where you joined in as one of the three character classes:

Sadly, it became an Orphaned Series and ultimately a Defunct Online Video Game: the last update was in 2010, the official forum was abandoned to spam while the Kongregate forum had only the occasional post asking if the game was still alive, and the Hub World of Nidaria rarely had more than three players in it. The game's servers were closed by its host Kongregate in 2014.