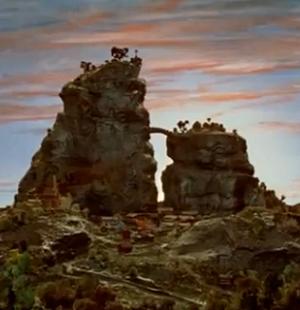 37 miles north, a little to the east and the merest tilt upwards, lies Flåklypa.
Advertisement:

Pinchcliffe Grand Prix or Flåklypa Grand Prix is a 1975 Norwegian animated feature film, directed by Ivo Caprino based on the works of author Kjell Aukrust, and featuring characters from many of Aukrust's books.

In the tiny mountain town Flåklypa ("Pinchcliffe" in the English dub) lives the bicycle-repairman and inventor Reodor Felgen ("Theodore Rimspoke") and his two assistants, Solan Gundersen ("Sonny Duckworth," a cheerful and optimistic morning bird) and Ludvig ("Lambert," a nervous, pessimistic and melancholic hedgehog).

One day, the trio discovers that one of Reodor's former assistants, Rudolf Blodstrupmoen ("Rudolph Gore-Slimey"), has stolen his design for a race car engine and has become a world champion Formula One driver. Solan secures funding from an Arab oil sheik who happens to be vacationing in Flåklypa, and to enter the race, the trio builds a gigantic racing car: "Il Tempo Gigante".

This movie is one of the (if not THE) biggest successes in Norwegian film: It's popular enough that it has sold more tickets within Norway than the entire Norwegian population.

Solan and Ludvig would go on to star in many books by Aukrust, usually composed of small humorous Slice of Life vignettes, and the pair would return to the movie world in the hand-drawn animated movie Solan, Ludvig og Gurin med Reverompa ("Solan, Ludvig and Gurin with the Fox Tail") in 1998, in which Reodor had a minor role. In this story, Solan is an Oslo private detective, with Ludvig as his assistant, and they are tasked with finding a nisse (sort of a Norwegian gnome) named Gurin, who has grown a fox's tail.

In 2013, a new stop-motion animated movie with the characters and setting (but with a different design and a different cast and crew) was released, named Jul i Flåklypa (English title: "Louis & Luca and the Snow Machine"). This was followed up by two more movies in the same style; Herfra til Flåklypa ("Louis & Luca — The Big Cheese Race") in 2015, and Månelyst i Flåklypa ("Louis & Luca — Mission to the Moon") in 2018. These three movies see Solan and Ludvig (here renamed "Louis" and "Luca" in the English version) back to living with Reodor, and each movie would heavily involve Reodor's inventions... from a snow machine in the first movie to a moon rocket in the third.

The follow-up movies provide examples of the following tropes: