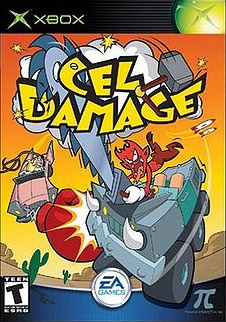 Tonight, on a very special episode of Cel Damage: Will Violet finally learn of the disease that's slowly killing her? Will Sinder finally become house-trained? ......NAH! We'll just drive around way too fast and blow up everything in sight like we do every week! (And don't forget to call in during the show and buy crap that you'll never need. Not available in all states.)
— Cel Damage! Tonight at 8.

Cel Damage is a Vehicular Combat game that was released in 2001 as a launch title for the Xbox, and then got ported to the Gamecube in early 2002. The game is about the eponymous TV show Cel Damage, a show where famous fictional cartoon characters compete in a destruction derby using various cartoon-themed weapons, and instantly respawn after death due to being cartoons.

The game was met with low sales and a mixed critical reception, but is very well-liked by most of those who have played it, and is considered one of the underrated gems of the sixth-gen era. A sequel entered development, with concept art and early footage being released to the public, but the game got cancelled before it progressed past the early alpha stage because of the poor sales of the original game.

In late 2002, an Updated Re-release, named Cel Damage Overdrive, was released for the Playstation 2. It offered several gameplay tweaks and some brand-new, exclusive features. This version never saw a release outside of Europe, however. Cel Damage HD, a remaster based on Overdrive, was released in Spring 2014 as a Cross-Buy title for PS3, PS4, and PSVita, this time getting a North American release. It was later ported to the Xbox One in March 2016 and the Nintendo Switch in March 2019.

These games contain examples of the following: