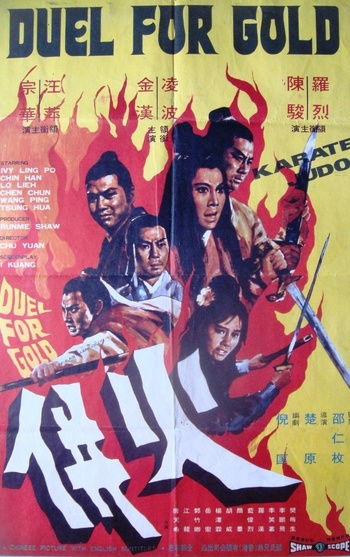 Duel for Gold is a 1971 wuxia film released by Shaw Brothers, starring Ivy Ling-po, Wang Ping, Chin Han, and Lo Lieh. Notably the first of many wuxia from long-time Shaw director Chor Yuen, the film is unusually bleak (even by Shaw standards!), full of characters with Grey-and-Gray Morality and questionable moral allegiances.

Opening right away with it's narration stating the film is about "greed, lust, and people willing to kill for money"; the film revolves around a band of rogues, including the thieves, the sister Yu Yen and Yu Ying, the bandit lord Master Shen, Shen's sworn brother Hua, and the marauder Wen Li Hsien, all whom had their eyes on twenty crates of gold in a vault. Avoiding attention from security bureau leader Teng Qi Ying (Lo Lieh in a rare good guy role), the rogues decide to form a truce to steal all the treasure, but then greed got the better of them and ends up biting them back in their asses.