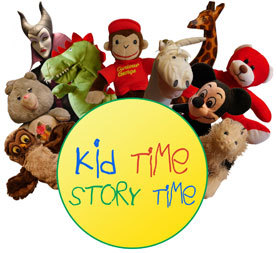 is a YouTube channel where a woman named Eileen (who goes by "Storyteller") reads children's books.
Advertisement:

It's basically just like a normal kids' story channel, but with two differences. One is that Storyteller sometimes interrupts the stories to comment on them, and another is that before, after, and sometimes during a story, Storyteller has conversations with a group of toys.

Each toy is given its own name and personality, and there are quite a few, including Doug the dragon/dinosaur hybrid, the bears Red Bear, Pink Bear, Green Bear, and Abuela Bear, Maleficent (later Witcheficent), Two-Tone the cat, Hooty the owl, and Corny the unicorn.

Please note: The examples refer to tropes about the channel itself or the conversations with the toys, not the books being read.

Green Bear and Witcheficent both need to pee.

Green Bear and Witcheficent both need to pee.