Film / The Book of Revelation 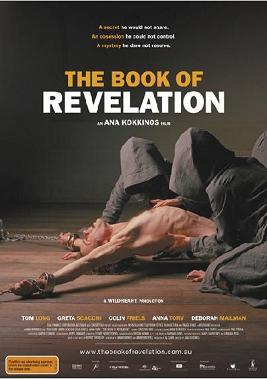 The Book of Revelation is a 2006 Australian film based on the novel by Rupert Thompson, directed by Ana Kokkinos and starring Tom Long, Greta Scacchi, Colin Friels, Anna Torv and Deborah Mailman.

Talented and acclaimed dancer Daniel (Long) is preparing for the opening night of a new performance directed by Isabel (Scacchi). When he goes out to get his girlfriend and fellow dancer Bridget (Torv) a packet of cigarettes, he doesn't come back. Tension mounts as he is still absent, and Isabel has to recast his role. She calls on the help of her friend Mark (Friels) a police officer with the Missing Persons division, but he can find no trace of Daniel.

12 days later, Daniel is thrown out of the back of a van. He returns to his and Bridget's apartment, and to the dance studio but will not say what happened, despite the large scratches down his back. In flashback, we learn that Daniel was abducted and held prisoner by three women to be used as their sex slave. They rape him and subject him to several other humiliations before dumping him back in the real world.

Daniel then sets out to find his abductors, and as he's only seen their bodies, begins an investigative odyssey of sexual encounters. It Makes Sense in Context. He soon finds comfort in the arms of Julie (Mailman) who, as a short Aboriginal lady, is automatically ruled out as one of his abductors, and Daniel slowly begins to regain his sense of trust and humanity with the world around him.

The film is very esoteric, and is not one to take lightly. Reviews were mainly positive, praising the performances of all involved (especially Tom Long in a challenging role) but the film is often criticised for being slow, with languid pacing and too much silence trying to pass as meaning.

Has absolutely nothing to do with the Biblical book, except maybe that the two texts feature people.