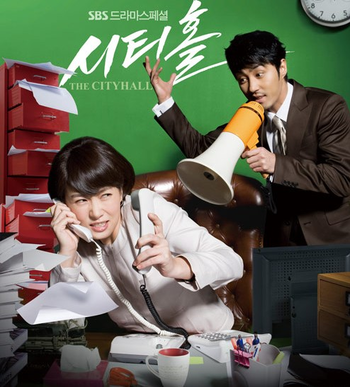 The City Hall (시티홀) is a 20-episode Korean Series that aired on the SBS Network between April and July 2009.

Set in Inju City, a provincial small town famous for its fishing industry, it's about the happenings between a young woman mayor and an elite bureaucrat. Ju Gook is an exceedingly smart government official who passed the Higher Civil Service quickly, and basically is the perfect guy. But being a deputy mayor is not enough for him. He lives with the dream of becoming South Korea's President. He should have easily gone straight to the top, but due to an unexpected incident, he gets dispatched as a deputy mayor for Inju City where Shin Mi Rae was working.

Shin Mi Rae is a low-ranking secretary in Inju, who mostly is known for her coffee. When the mayor resigns his position, she becomes an independent candidate and ultimately succeeds in becoming the youngest City Mayor.

As their paths meet, they have to deal with each other's personal and social differences. But despite their constant bickering, they end up falling in love.

Councilwoman Min Joo-hwa discovers why it's a really bad idea to insult the owner of the only toilet while suffering a severe Potty Emergency.

Councilwoman Min Joo-hwa discovers why it's a really bad idea to insult the owner of the only toilet while suffering a severe Potty Emergency.