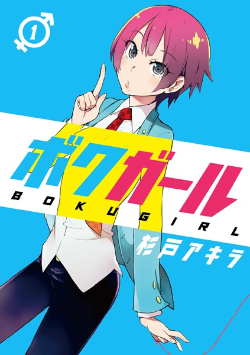 Boku Girl is a seinen Gender Bender series by Sugito Akira that ran in Weekly Young Jump from 2013 to 2016.

Suzushiro Mizuki is a first year high school student who's considered very attractive by many of the guys at school, and is constantly getting asked out. Unfortunately for Mizuki, he is also a guy. Even his crush, Fujiwara, thinks of him as a girl friend. Only his best bud Ichimonji Takeru seems to know and care that he's a man.

The story begins with Mizuki receiving yet another confession of love by a guy who won't back down even after Mizuki tells him he's male near a supposed Magic Mirror that grants the wish of anyone who confesses to someone before it. Meanwhile, the Norse god of trickery Loki has decided to turn her eye to the mortal world for a new form of entertainment. Seeing Mizuki's situation, she decides to have some fun and turn Mizuki into an actual girl.

Waking up with two new breasts and one missing willy, Mizuki reveals his situation to Takeru and desperately looks for a way to turn himself back into a boy and hide his new form. Just to add to the problem, Loki has decided to enroll in Mizuki's school to directly provoke and antagonize him.