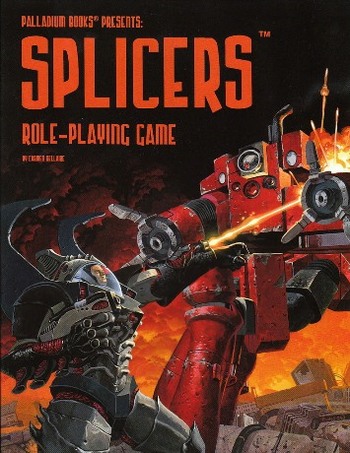 Splicers is an RPG by Palladium Books (makers of Rifts and the Robotech RPG). It is best described as "Guyver vs. The Terminator".

In the far future, Humankind had grown dependent on a machine intelligence called N.E.X.U.S. We're fairly certain you can see where this is going already: Computer goes crazy, decides to Kill All Humans, La Résistance rises up to fight them, yadda yadda yadda.

Here's where it gets interesting: The Machine gets clever and tries to disarm the Resistance with a Nanobot Plague. This plague turns not only machinery, but even otherwise inert metal into deadly weapons if touched by organic life. (Guns only fire when pointed at humans, Humongous Mecha come to life and attack their users, even a spoon will sprout Combat Tentacles and try to impale your hand). In response, the Humans turned to powerful bio-weapons, genetically engineered monsters, and living Powered Armor to continue the fight.