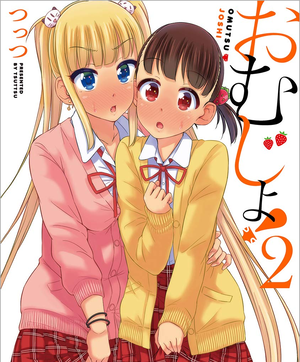 Life is dull for second year high school student Shouta Oone. Not even getting a peek up a girl's skirt provides the thrill it once did. That changes one fateful day when he gets a look under the skirt of his classmate Ichigo Otohime and discovers a shocking secret. Rather than strawberry patterned panties one might expect of a girl named Ichigo, she's wearing a strawberry patterned diaper!

Thus begins Omujo! Omutsu Joshi by Tsuttsu, a harem manga with the twist that the girls of the harem, for one reason or another, all wear diapers.

For Ichigo Otohime, the presence of men makes her so nervous she loses control of her bladder. Shouta's childhood friend, Morei Nekomata, wears diapers because she is convinced after watching him with Ichigo that they're the key to Shouta's heart. Finally, for third-year Muni Nunota, it's a matter of pure pleasure and the idea of Shouta being into it, too, leaves her just fit to burst.

The series ran for 28 chapters, from December 2016 to February 2019 with a hiatus in between, on the Japanese manga/webcomic site Zenyon.