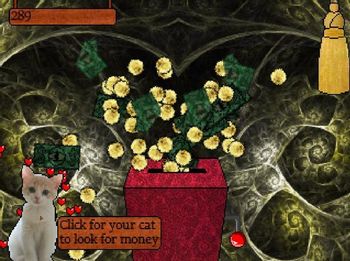 I see you are making money...
Exoptable Money is an indie game and a prequel to Presentable Liberty. The game revolves around making as much money as possible, which spouts from a single red box. Over time, the player will receive letters from unseen characters who wish to 'help' you make more money.

Remakes of both this game and Presentable Liberty have been announced

on Kickstarter. The first attempt and second

attempt both failed, but a third

and last attempt was recently launched. Sadly, the games will never get a revamp, because the creator, Wertpol, committed suicide sometime in early 2018.