Literature / The Tale of Samuel Whiskers 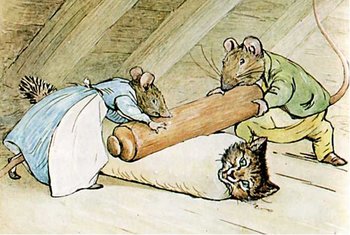 The Tale of Samuel Whiskers is a children's book by Beatrix Potter. It was published in 1908, and is the sequel to The Tale of Tom Kitten.

Tom Kitten lives in a rat infested house with his mother, Tabitha Twitchit, and his sisters, Moppet and Mittens. He decides to go into hiding when his mother does the baking, instead of being shut up in a cupboard with his sisters to keep them from getting lost and in mischief! He pauses at the fireplace and decides to leap up into the chimney. He finds a crack in the wall big enough to squeeze through and finds himself in the attic. There he falls into a hole populated by the main title character, Mr. Samuel Whiskers, and his wife, Anna-Maria, who immediately sets upon him and ties him up. The two rats then consult with one another what to do with the kitten, and decide to make a pudding out of him. They both disappear to retrieve the items and ingredients they need, including butter, dough, and the rolling-pin. When they return, they smear Tom with butter and roll him in the dough, creating what is arguably the world's first purrito.

Meanwhile Tabitha Twitchit realizes Tom is missing and is searching for him. Her daughters get out of the cupboard, then go play with the dough for a bit, are startled by a knock at the door, and then are frightened by the rats. The person at the door is Mrs. Ribby, Tabitha's friend, to whom Tabitha bemoans what unruly children she has and how the rats in the house are too much for her. Eventually Moppet and Mittens are retrieved from a flour-barrel in the pantry and an empty jar in the dairy, and both report observing a rat stealing dough, and another rat stealing the butter and the rolling pin. Tabitha's friend Ribby helps search for Tom, and they call for the carpenter, John Joiner, after they hear a roly-poly noise under the floor of the attic. Tom is retrieved and the pudding is pulled off him, which is made into a bag pudding (the currants being expressly to hide the 'smuts'). Then he's given a hot bath.

Meanwhile, Samuel Whiskers and Anna-Maria evacuate the house, fleeing with the author's wheelbarrow and taking up residence at Farmer Potatoes' barn. Here they have many children and wreak havoc.

In postscript, Mittens and Moppet become excellent paid rat-catchers, but poor traumatized Tom is scared of anything larger than a mouse.