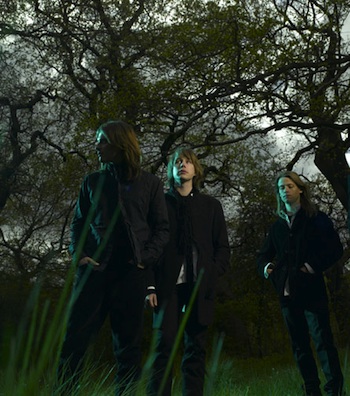 It is a lovely morning... or evening... or something.
Advertisement:

Mew is a band from Denmark that makes Indie Pop most of the time (in other cases, their music is... less definable). After releasing their first 2 albums on indie labels strictly in their home country, Mew were signed by Epic Records in 2003, which handled the distribution of all their subsequent records worldwide.

Tired of bland imported pop in the early 90's and "the lack of a truly alternative scene in Denmark", they decided to help form one. Determined to not make predictable songs, Mew tried their best to make each song as different and interesting as possible (though still rooted in guitar rock for the most part). This is a tradition they carry on to this day.

The lineup consists of Jonas Bjerre (lead vocals), Bo Madsen (guitar), Silas Utke Graae Jørgensen (drums) and Johan Wohlert (bass). In 2006 the bassist left the band to spend more time with his family, and the band was a 3-piece until summer 2014, when they confirmed he was back on board. In the summer of 2015, Bo left the band for for the first time since its creation, although not necessarily forever. Until he returns, Mads Wegner will be playing with the trio on live shows.

by the way. And a fan

Not to be confused with the legendary Pokémon or the Vocaloid character.

The band provides examples of the following: