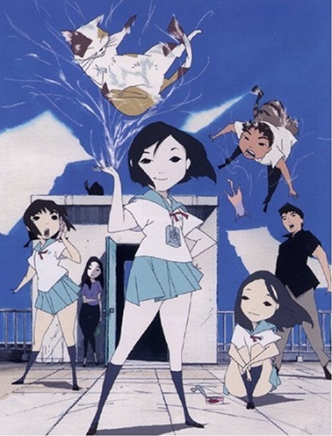 Nao is the president of her junior high school's digital photography club, which only has one other member: her best friend, Miki. She likes to take pictures of the clouds above the school from the roof top, although she claims she is trying to capture the wind.

One day she sees a strange cat, which appears to be able to fly in the sky. When she tries to take its picture she discovers a whole swarm of such cats, seemingly floating on air streams. The surprise makes her fall down from the roof, but before she can meet her demise she gets saved by the wind manipulation powers of her math teacher, Taiki-sensei. This is the beginning of a quest for the secret of the wind manipulation techniques, in which Nao and Miki are joined by Miki's boyfriend Jun and a girl called Ryoko, who also appears to master some wind manipulation herself.

Windy Tales (Japanese: Fuujin Monogatari,) produced by Production I.G and released in 2005 as a 13-episode anime, has a very easy-going pace and the wind manipulation powers of Nao, Miki, Ryoko and Taiki-sensei are used as a device to string along various stories about the significance of wind in people's personal lives. Of special note is the artwork, which is quite different from the Moe-influenced design of most other anime with its emphasis on slender girls and big eyes. The character designs in this show have an almost sketch-like and permanent Super-Deformed quality to them, but with some of the most expressive facial features ever.

For lovers of heartwarming Slice of Life shows, Windy Tales is highly recommended, especially with the top-notch Japanese voice acting in this series.