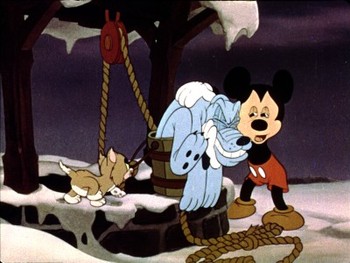 Lend a Paw is a 1941 animated short film from Disney, directed by Clyde Geronimi, starring Pluto the Pup. It is a remake of the 1933 short Mickey's Pal Pluto.

In this cartoon Pluto is out and about on a snowy day when he sees someone throw a sack with a brick around it into a stream. Pluto saves the victim inside the sack—a cute kitten. This backfires on Pluto when the kitten follows him home and Pluto's owner, Mickey Mouse, takes a fancy to the kitten. Mickey gives the kitten milk in Pluto's bowl and lets it sleep in Pluto's bed, much to the frustration of Pluto, who plots to get rid of the kitten.

The only cartoon featuring Mickey Mouse to ever win the Academy Award for Best Animated Short Film. Mickey is voiced by, of course, Walt Disney.