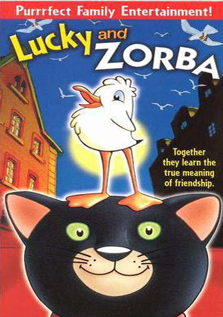 As the story begins, we meet a young seagull named Kenga. While with her flock, she gets dirtied by an petrol flood. She blindly flies to a city, where she finally crashes into a garden, right on top of the cat who lives there, Zorba. Because of the petrol on her feathers, he refuses to eat her, and she gets him to promise three things: that he would not eat her egg when she lays it, that he would take care of it until it hatches, and that he would teach the newborn to fly. She then dies of exhaustion.

Some days after, the egg hatches, and Zorba names the newborn Lucky.

Meanwhile, the rats of the town plan an uprising against the town's cats, and their plans involve Lucky...

Lucky and Zorba contains examples of: