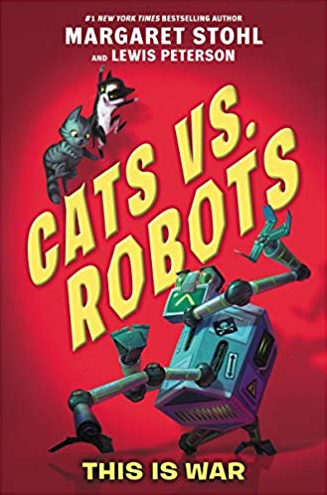 Cats Vs. Robots is a children's book series by Lewis Peterson and Margaret Stohl.

For centuries, the Great Feline Empire and the Great Robot Federation have been at war with each other. Why? Even THEY can't remember. They just know they both want to win. Earth has been completely unaware of this war, though, and neither side really considers them a threat...

That is, until a new chip is invented on Earth.

The "Singularity Chip" as it's called has the power to extend battery life indefinitely. For cats, it means more than nine lives. For robots, it means no longer needing to recharge. Of course, both sides want the chip.

Said chip is located in the house of the Wengrod family, made up of the scientist mother and father, and the twin kids Min and Max. The parents are called away to a factory in China to deal with a problem that seems to have come up, leaving the kids in the care of their older cousin, Javi. While they're away, Max finds a couple of stray kittens floundering about in the river, rescues them, and decides to bring them home. This is a problem, though, as the Wengrods are more into robotics than animals, especially cats. However, Javi agrees to let them stay in the basement for a few days.

Meanwhile, the GFE and GRF's field agents, the elderly cat Obi and the Wengrod house's AI, "House", are both contacted to bring them the chip. Obi recruits Max's new kittens, a plump, dark grey male cat named Stu and his skinny Calico sister Scout, telling them to bring him the "SparkleTreat" before the robots can destroy it. House recruits the Protos, a gang of homemade household robots the Wengrods built, to protect the home from the feline threat the kittens represent so they can secure the chip. Effectively, the Wengrod house becomes ground zero for a battle that could decide the fate of the universe.

There are currently two books in the series.

Cats Vs. Robots contains examples of: