Literature / The Decline of the West 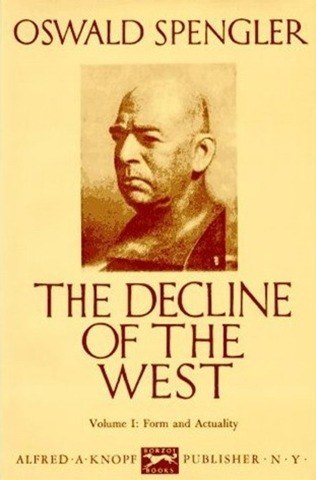 The Decline of the West is a philosophical book by German philosopher Oswald Spengler. While the title suggests being mainly about the fate of Western civilization, it actually covers a lot of topics - the history of the other great cultures (Chinese, Indian, Aztec, Babylonian, Middle Eastern, Egyptian); the development of arts, science and religions; also, that of politics, economy, technics and war; and finally, tying everything together with "morphology", i.e. comparing the shapes of different cultures and find the equivalents of, let's say, Napoléon Bonaparte, in them note In the Greco-Roman culture, that would be Alexander the Great. Yes, Spengler was a bit of a Renaissance Man in that.

The book influenced people from Henry Kissinger to Joseph Campbell, and even a thinker critical of Spengler as Theodore Adorno conceded that Spengler's insights were often more profound than those of his more liberal contemporaries, and his predictions more far-reaching.

Spengler's works are in the public domain (at least in Germany), and you can read them on the internet for free. Here are links to Part 1

Provides examples / considers the topics of: