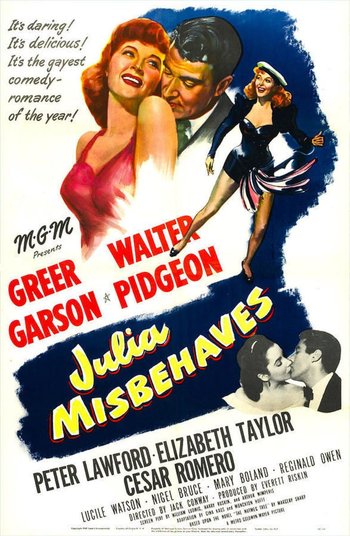 Julia Misbehaves is a 1948 romantic comedy film directed by Jack Conway, and stars Greer Garson, Walter Pidgeon, Cesar Romero, Peter Lawford, Mary Boland, Lucile Watson, and Elizabeth Taylor. It was based on the novel The Nutmeg Tree by Margery Sharp, a story that was also turned into the 1940s Broadway play Lady in Waiting.

The story stars Julia Packett (Garson), a British showgirl that is invited to the wedding of her estranged daughter Susan (Taylor), who she hasn't seen in ages due to financial struggles, and her former marriage to her father William (Pidgeon) and her rocky relationship with his mother, who had scared her away in the first place. During a tour of France, Julia meets an acrobat called Fred Ghenoccio (Romero), and the two of them instantly flirt with each other, but Fred becomes so enamored that he proposes to her seconds before the two of them have to part. Julia reunites with her husband and her daughter, despite her mother-in-law's (Watson) annoyance, and is more than happy to stay for Susan's wedding, but as her romance rekindles with William, her daughter appears to be hesitant about her love for her fiance, becoming very interested in artist Ritchie Logan (Lawford), and a lovestruck Fred.