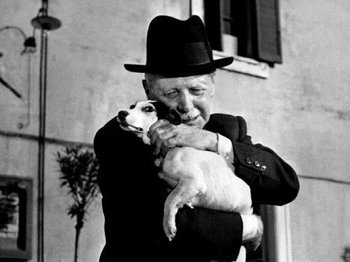 Umberto D is a 1952 film from Italy, directed by Vittorio De Sica.

Umberto D. Ferrari is a retired clerk struggling to survive on his tiny government pension, his only companion in life being his little dog Flike. Umberto returns from a protest demanding increases in government pensions, only to find that his bitchy landlady Antonia is renting out his room to other guests. The landlady has raised his rent from 10,000 lira per month to 15,000, and tells Umberto that he's out at the end of the month, as he's behind on his rent as it is. Umberto goes on a desperate scramble to find enough money to pay his rent, or to at least fight his imminent eviction. A subplot deals with Maria, the maid at the boarding house, who is pregnant.