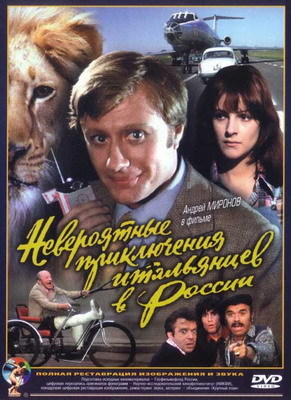 In a hospital in Rome, a woman named Olga sits at her grandmother's bedside during the latter's final moments. The grandmother (an immigrant from Russia) reveals that she used to be an aristocrat before the Communist Revolution and was forced to flee the purges. Apparently, she hid a treasure somewhere in Leningrad (back when it was called Petrograd) "underneath a lion". Then the grandmother dies, but Olga isn't the only one to hear the deathbed confession. A doctor, two male nurses, a patient with a broken leg, and a mafioso overhear it as well. All of them decide to race to Leningrad to claim the treasure (worth 9 billion lire). All of them take the next flight to Leningrad, but the mafioso attempts to kick the doctor out of the race by flushing his passport (it works, the doctor spends the rest of the film shuttling between Leningrad and Rome, unable to get off the flight because he lacks identification). He then nearly depressurizes the plane, resulting in it landing on a highway. The Italians are greeted by a man named Andrei, who claims to be a guide for the "millionth Italian visitor" (one of the male nurses). In fact, Andrei is an undercover cop, sent to keep an eye on the visitors, as the state police is aware of their goal. As the Italians are scouring the city for clues, exacerbated by the fact that Leningrad is known for an incredible number of lion statues, Olga, who is slowly falling for Andrei, reveals that her grandmother whispered a second clue to her with her dying breath, something only she knows.

The race turns into an elimination game, but Olga manages to finally locate the treasure (hidden under the cage of a real lion, not a lion statue) before the Italians are cornered by the cops. Andrei reveals his identity and explains that the cops have been tipped off to the treasure hunt while they were still on their flight. By Soviet law, all treasure found on Soviet soil is the property of the state, but the Italians will get a finder's fee equal to 25% of the treasure's worth, which is still a considerable amount, even when split between them. Most of the treasure hunters fly home, but Olga chooses to stay with Andrei, who has received a promotion.