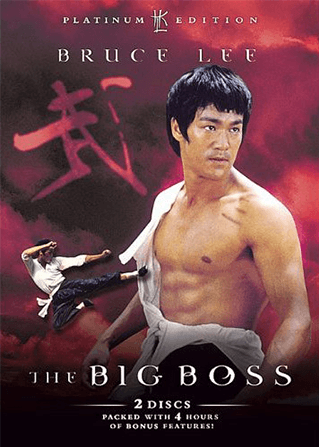 After trying to make a name in Hollywood with the TV series The Green Hornet with mixed results, young actor and martial artist Bruce Lee traveled back to Hong Kong where his popularity as Kato was very high. There, he met Raymond Chow of Golden Harvest and received the chance to star a film about martial arts. Tang Shan Da Xiong (唐山大兄; "Big Brother from China"), or The Big Boss (known in the U.S. as Fists of Fury, in which case it is not to be confused with his later film Fist of Fury), was the final result and the movie that started Lee's career and his way to becoming a legend of celluloid.

Cheng (Lee) is a Chinese man from Guangdong who has moved to Thailand with the help of his uncle. Prior to the start of the film, Cheng took an oath of non-violence at the behest of his mother. He becomes acquainted with an expatriate family, and soon comes to be very close to them, especially the sweet but vulnerable Chiao Mei (Maria Yi), with whom he develops a romance. Alas, getting a job at the ice factory where his cousins work, one day a block of ice is broken to reveal a bag of heroin inside. It turns out the ice factory is a front for a drug operation. The boss of the factory, Hsiao Mi, offers the workers (two of Cheng's cousins) who discovered the heroin a bribe to keep quiet. When they refuse it, he has them killed and concealed in ice blocks. Cheng and the remaining cousins start conducting an investigation. Hsiao tries to dissuade Cheng by promoting him to a foreman, but when this fails, he has the remainder of the family (sans Chiao) murdered. Cheng discovers them dead, and goes on a Roaring Rampage of Revenge.

Directed by Lo Wei(who would also discover Jackie Chan), The Big Boss was a breath of fresh air to Hong Kong martial arts films of the time as it showed a flawed hero in a modern setting. The story (by Lo Wei and Bruce Lee), differently from the Wuxia flicks that were the norm at the time, was set in contemporary times and filled with suspense and action, and in an unusual move for an action film, the main character remains almost inactive for the first half as Cheng must avoid violence due to his oath. The film not only launched Lee's career to the stratosphere, it influenced his own film-making style and the way future martial arts movies were done.

Lo Wei's usually restrained style was also influenced by his young actor's abilities. The Big Boss can be seen as his transition to a more explosive way of martial arts film-making that would be completed in Fist of Fury and subsequent Jackie Chan films. The raw and grindhouse look of the film plus the high dose of graphic violence (it is probably the goriest film in Lee's career, and consequently the most cut and censored) gives the movie a harsh, gritty realism that adds to its charm.

As many have already said (and will continue saying without a doubt), Lee was a very charming actor whose presence filled the screen and owned it completely. That statement is proved here as we see him not as a killing machine, but as a common man who just wants to live peacefully, giving us many scenes of Cheng enjoying his newfound family and struggling with his own vices and inner demons. Lee's performance is very natural, although one could say that he was basically playing a portion of his personality.

To summarize, this is a watershed martial arts film both in terms of its star and the genre as a whole, and is thus essential viewing for anyone interested in either.

Not to be confused with the Metal Gear character who goes by "Big Boss".