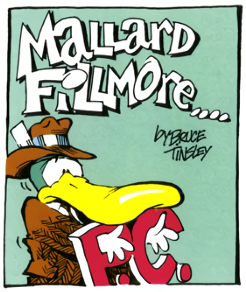 Mallard Fillmore demonstrating the premise of his comic
Advertisement:

Mallard Fillmore, created by Bruce Tinsley and currently produced by Loren Fishman, is about an anthropomorphic duck journalist and the struggles he finds in dealing with a liberal world. It started out as a non-political strip for the Charlottesville Daily Progress, which had asked Tinsley to create a mascot strip for their entertainment page. After several rejections, the eponymous duck won out and the strip was launched. After Tinsley expressed his conservative political views, he found himself out of a job. He successfully sold the strip to The Washington Times in 1992 and eventually got it syndicated nationally by King Features Syndicate.

Much like compatriots Prickly City and Doonesbury, the strip is ostensibly a slice of life story with a political bent. When the strip began, Mallard was hired to work at a television news station and thus his co-workers (all liberals, naturally) served as targets for the strip's conservative humor. Over time, this has largely been dropped and most of the supporting cast only appear very rarely. Today the strip just generally portrays Mallard as a mouthpiece for Tinsley's personal views, blurring the line between a straight newspaper comic strip and a series of political cartoons that all happen to feature the same character.

Tinsley wrote and drew the strip himself until late 2019. While no stranger to controversy given his volatile opinions, a particularly aggressive strip aimed at Rep. Ilhan Omar got the strip dropped from several papers

in late 2019. The strip went on a short hiatus, running four months of reruns, before Loren Fishman

took over the production of the strip in March 2020. While still credited as a guest artist, it's unclear if Tinsley is still involved, in what capacity, whether he voluntarily left, and if he will ever return.

This strip provides examples of: