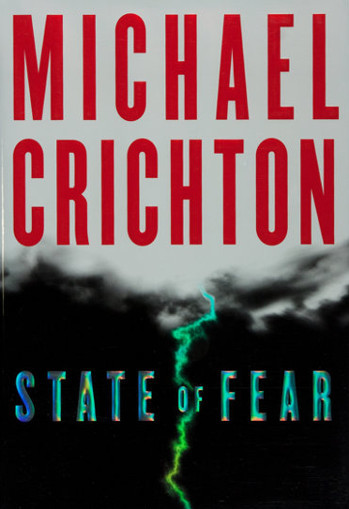 State of Fear is a novel by Michael Crichton. In a nutshell: environmental terrorists try to cause a series of "natural" disasters to give the US a very good reason to start spending more on anti-global warming initiatives.

Everyman attorney Peter Evans is in charge of managing millionaire philanthropist Goerge Morton's contributions to an environmentalist organization, the National Environmental Resource Fund (NERF). After Morton's disappearance Evans joins his former assistant Sarah Jones on a globe-trotting series of adventures to thwart various natural disasters that have in fact been engineered by an environmentalist terrorist group. On the way, Evans begins to question what he thought he knew about global warming.

A Global Warming themed conspiracy novel by Michael Crichton, as in "global warming is a conspiracy to get power." Cue the media firestorm calling it controversial, which naturally amounted to free advertising.

State of Fear provides examples of: