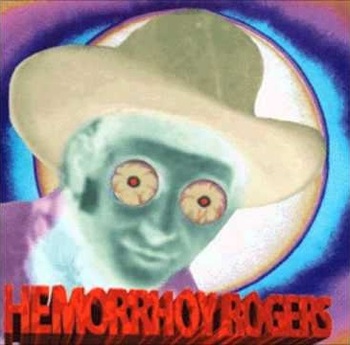 Hey everybody! It's time for fun!
Advertisement:

Hemmorhoy Rogers (also known as "Hemmorhoy Rogers and the Rhhoid Boyz") is a band founded in 1996-1998. An fairly obscure band, Hemorrhoy Rogers is famous (or infamous) for making some of the weirdest songs imaginable, to which have been described as "either some of the worst songs ever made or the some of the best". Needless to say though, that is the entire point of this band. Not much is really known about the backstory of this band, other than they are one of the many bands created by Big Poo Generator (the others beings The Gland Puppies, The Wacky Ball Kickers, The Crapenters, etc.) After making a few albums, the band seemed to vanish off the face of the Earth. Regardless, they have managed to gain a Cult Following these days due to their bizarre, gross, sometimes dark but utterly hilarious songs.

Your probably have heard their most famous song "I Am Retarded" on many funny videos on YouTube before.

Tropes and other entries associated with the band include: