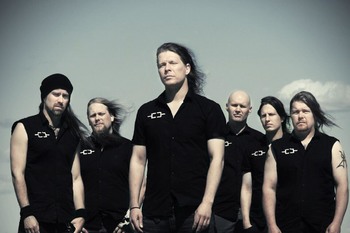 -[ ]-note From left to right: Markus, Jope, Jukke, Tuomo, Erkki, and Aapo
Omnium Gatherum is a Melodic Death Metal band that was formed in 1996 in Karhula, Finland. And has become something of a hidden gem of the genre ever since their first album, Spirits and August Light released. From that point on, the band has sort of gone through a tonal shift from that initial album and the ensuing album Years In Waste, which was spurred by the departure of the lead vocalist at the time, Antti Filppu and was replaced by Jukka Pelkonen.
Advertisement:

Pelkonen's much more deep Guttural Growler style helped push the direction of the music OG was putting out toward what it would end up being for most of their ensuing albums: deep, introspective pieces about human individuality, layered by very melodic and powerful riffs and beats, starting with Stuck Here On Snake's Way, and solidifying with The Redshift a year later. Their big break came from their next album, New World Shadows, which was released to rave reviews and was considered a modern classic for the genre. Their most recent release is Origin, which continues most of the themes and sound stylings of New World Shadows.

Omnium Gatherum lyrically has taken an interesting inversion to the typical lyrics one might expect from a Death metal band. In fact, the band's lyrical content is actually quite optimistic, especially since the departure of Filppu. Most of their songs deal with emotion and how we deal with it, or how we react to crossroads in life.

They're also known for sharing a lead guitarist with Insomnium, and both fanbases are close enough that they sometimes call each other "Insomnium Gatherum".