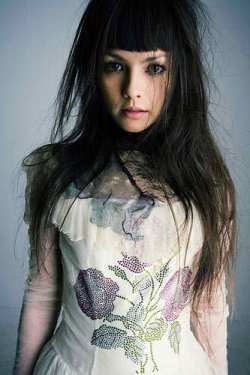 Also known by her birth name, Olivia Lufkin (born December 9, 1979) is a Japanese-American bilingual singer-songwriter. Her musical style is recognizable for its distinct style of Alternative Rock. Sometimes, if not often, her lyrics are quite symbolic, but it's up to the listener to figure out what to make of it.

Her early days involved being in a Japanese idol group called D&D, whose songs and music had a very different sound to what she'd be singing several years later. After they disbanded, she continued as a solo artist and began singing songs with a more pop-rock sound. As time went by, she started to create her own songs. She received mainstream success (and is best known) for creating songs for the fictional band Trapnest from the animated adaptation of NANA, under the alias of Olivia Inspi' Reira (Trapnest).

Not to be confused with African-American R&B singer Olivia (last name Longott), perhaps best known as an employee of 50 Cent's "Candy Shop."