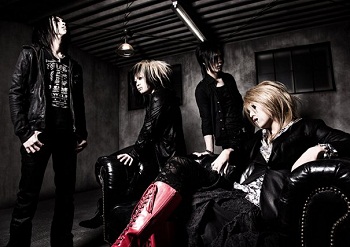 Deathgaze is a Japanese four-piece Visual Kei metal band formed in 2003. Signed to Enter Brain, the band has released five studio albums and two extended plays. Originally a Death Metal band, they have since shifted into a more melodic Metalcore-influenced sound in subsequent releases.The band's lineup originally consisted of bandleader Naoki on drums, Hazuki on vocals, Ai on bass, and Kanna on guitar, but in 2004, Hazuki left to form his own band, Lynch.; Kanna would also leave the band in the same year. The band's lineup has become mostly unstable ever since.

The band is part of the Second wave of Visual Kei, together with other groups and artists such as The Gazette, An Cafe, Miyavi, GACKT, exist†trace and Dir en grey. The band is also, along with Kuroyume and Lynch, a co-Trope Codifier for Nagoya kei.

Deathgaze and their music provide examples of the following tropes: