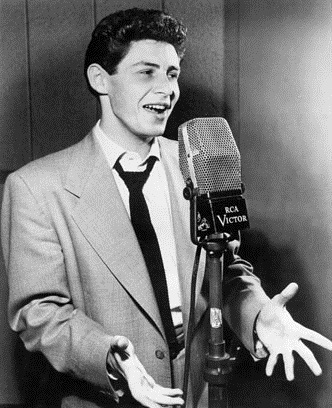 Edwin Jack "Eddie" Fisher (August 10, 1928 – September 22, 2010) was an American singer and actor. He was the most successful pop singles artist during the first half of The '50s, selling millions of records and hosting his own TV show.

Of course, Fisher is better known nowadays for divorcing his first wife Debbie Reynolds, with whom he had two children, Carrie and Todd, to marry Reynolds' best friend Elizabeth Taylor when Taylor's husband, film producer Mike Todd, was killed in a plane crash. This event brought scandalous and unwelcome publicity for Fisher. Incidentally, Fisher passed away six months before Taylor.