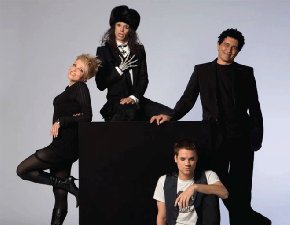 The lineup as of 2018 from left to right: Lorna Doom, Don Bolles, Shane West and Pat Smear.
Advertisement:

The Germs were a band from Los Angeles, California that formed in 1977 after Jan Paul Beahm and Georg Ruthenberg (later dubbed Darby Crash and Pat Smear, respectively) made the decision to form a band after being kicked out of school as "Sophistifuck and the Revlon Spam Queens". They shortened this to The Germs (to represent the germination of an idea) when they realized they couldn't afford to put all of that on a t-shirt. Upon finding a stable lineup of Darby Crash, Pat Smear, Lorna Doom, and Don Bolles, the band started performing semi-regularly in the LA area, and the band's fanbase started to rise, with food fights between band and audience becoming common; as a result, the band was frequently blacklisted from LA clubs, a problem they alleviated by playing as GI (Germs Incognito).

The band released one album - 1979's (GI), produced by Joan Jett - before vocalist Darby Crash died of an intentional heroin overdose on December 7th, 1980, whose death was overshadowed by the murder of John Lennon a day later. In 2005, the band reunited with Shane West on vocals to mixed reception among the punk community (the most vocal of those who disliked the reunion include Fat Mike and Jello Biafra), and a film featuring Shane as Darby Crash titled What We Do Is Secret came out in 2008. On January 16th, 2019, Don Bolles announced bassist Lorna Doom's death on Facebook, leaving the chances of any future reunions with the Germs unlikely.

The Germs are prominently featured in Penelope Spheeris's 1980 documentary of the LA punk rock scene, The Decline of Western Civilization.

Tropes that apply to The Germs: