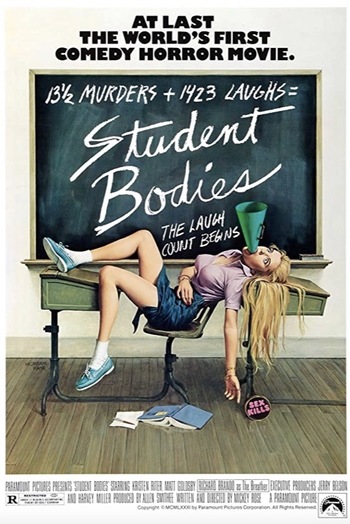 Before you Screamed, there were Student Bodies.

A 1981 Horror Comedy film directed by Michael Ritchie (uncredited in that capacity, though he's sort of credited as a producer) and co-directed by early Woody Allen collaborator Mickey Rose (given a full director's credit), Student Bodies is a Parody of the many Slasher Movies of its era and includes much Lampshade Hanging of the various tropes and cliches of that genre, with the most noteworthy lampshade consisting of an onscreen body tally.

The plot revolves around a mysterious murderer whose face is never seen, known only as "The Breather", who stalks and kills sexually active teenagers. The resident Final Girl, Toby Badger, is something of a Straw Prude herself and as such becomes the prime suspect.

In spite of having done a lousy job at the box office in its original release, the film has achieved cult status, largely in part because of its comic nature and rapid-fire subversions.

Tropes butchered by this film include:

Example of:
Sophisticated as Hell