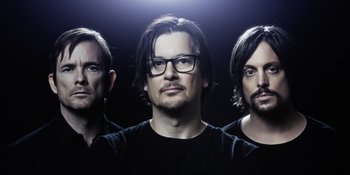 Failure circa 2015. From left to right: Kellii Scott, Ken Andrews and Greg Edwards.
"The sun's just
A big glass.
We're all ants.
I love you."
— Failure, "Magnified"
Advertisement:

Failure is an Alternative Rock/grunge band from Los Angeles, founded in 1990 by Ken Andrews and Greg Edwards. While they never got much media attention, Failure earned praise from both critics and peers for their unique, deeply introspective take on grunge music. Because of how many musicians spoke highly of them (including A Perfect Circle's Billy Howerdel, Faith No More's Billy Gould and Dean DeLeo of Stone Temple Pilots), Failure are also known as "your favorite band's favorite band".

Failure's sound is often compared to that of Nirvana, however, it's more melodic and elaborate compared to the latter's raw approach, leaning more into alternative rock or even Space Rock territory. A lot of songs feature distortion-heavy guitar hooks backed by thick, overdriven basslines: Andrews and Edwards are both skilled at bass and guitar, so in the studio they switch roles on different songs. The lyrics, mostly written by Ken Andrews, are characterized by use of unusual metaphors and recurring themes of isolation, dreams and drug use.

The band's two core members, Andrews and Edwards, started out as a duo playing L.A. clubs until they got a record deal with Slash Records, added drummer Robert Gauss to the lineup and began recording their debut album, Comfort. Though the record was engineered by none other than Steve Albini, the band were not satisfied with the final mix, their ideas clashing with Albini's minimal production. For the recording of the next album, Andrews requested more control over production, and the drums were now manned by Kellii Scott, who remained a permanent member of the band. The result of this was 1994's Magnified - the record which helped establish Failure's signature style for years to come, as well as the one that got them widespread recognition among fellow musicians, including tool, with members of whom Ken and Greg would work on a one-off cover project Replicants in 1995. The band's third release, 1996's Fantastic Planet, a concept album of sorts that dealt with heroin abuse and had a more "spacey" sound, with feedback manipulation and a bit of keyboards, only solidified Failure's place in the history of 90's music and became their most popular record.

After playing Lollapalooza 1997, Failure disbanded the same year due to personal differences. Ken Andrews started working solo under the moniker ON, also continuing his work as a professional sound engineer, while Edwards formed the shoegazing band Autolux. However, in 2013 Failure announced their reunion with the original Andrews-Edwards-Scott lineup and went back into the studio to record a comeback album. The Heart Is A Monster, which came out in 2015, was praised by fans and critics for retaining the trademark sound, while adding new elements to the formula. From then on, Failure have been steadily producing new music.