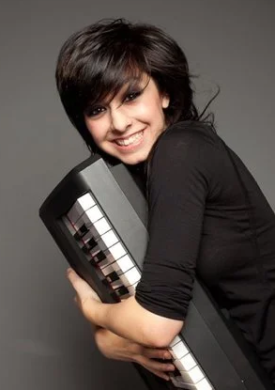 "All the disadvantages of this world are due to the insecurities of the person himself's ability."
— From a tribute

Christina Victoria Grimmie (March 12, 1994 - June 10, 2016) was an American singer who was also known as zeldaxlove64 on YouTube. She wrote her own songs and has three albums out: Find Me, With Love and All Is Vanity. She did almost a hundred covers of various songs from "Titanium" to "Party in the USA" and six Above All That is Random videos. Christina also appeared on the sixth season of The Voice as a contestant, finishing in third.

Grimmie was murdered on June 10th, 2016 by an assailant at a meet-and-greet in Orlando, FL, who shortly afterwards committed suicide. The follow-up EP to her Side A EP that she had been working on at the time of her death, Side B, has been released posthumously. She posthumously starred in the 2016 film The Matchbreaker. In 2019, her backing band, including her older brother Marcus, formed the group The Similar and released an EP. In 2020, her producer and boyfriend, Stephen Rezza, announced his plans to make an album featuring her vocals, as shown by his single "Hard Mode".

It was only just a dream...