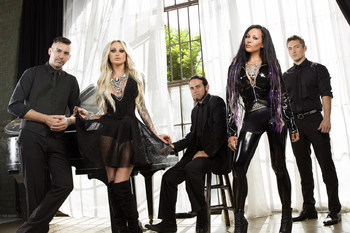 A Heavy Metal band based in Los Angeles, Butcher Babies was founded by Carla Harvey and Heidi Shepherd in 2009. They made waves in the California metal scene due to their aggressive sound and a vicious stage appeal heavily influenced by Wendy O. Williams of The Plasmatics, whose song "Butcher Baby" also christened the band. They released their eponymous EP in 2012, followed by their debut Goliath in 2013 (and thankfully, more comfortable stage fashion for the two vocalists). Their sophomore effort Take It Like A Man followed up in 2015, and after extensive touring and the departure of drummer Chris Warner, the band took the following year to regroup and come up with a more refined sound for their third album Lilith, released in 2017.

Tropes applying to their music videos:

Tropes that apply to Carla and Heidi include: