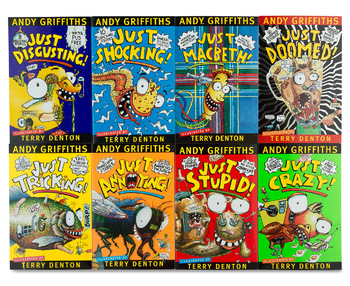 This was written for kids.
Advertisement:

Andy Griffiths' Just...! series is a collection of stories revolving around the antics of a pre-teen protagonist.

Andy is an imaginative boy who thinks outside the box any chance he can. He's also a notorious mischief-maker whose schemes blow up in his face due to his lack of foresight. Among the recurring cast are Andy's sidekick Danny, his love interest Lisa, his bewildered parents, his sister Jen and her hot-tempered boyfriend Craig, his dad's boss Mr Bainbridge and his wife, dog Sooty and teacher Ms. Livingstone.

This Australian series has been running from 1997 to 2012 and includes the following books:

The Just...! series also spawned a Animated Adaptation in 2001 called What's with Andy? that was made by the Canadian animation studio CinéGroupe.