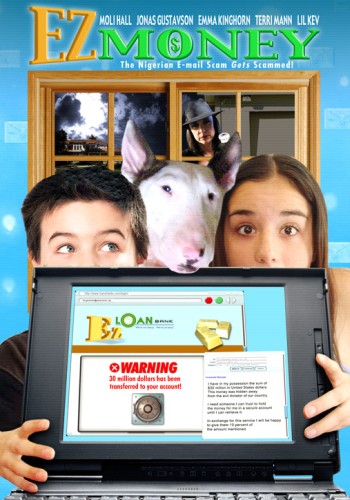 "If it sounds too good to be true... it is!"
Advertisement:

EZ Money is a 2005 Direct to Video kid flick based around the 419 Scam, known colloquially as the Nigerian e-mail scam. The premise revolves around a young girl, Molly, who while briefly left alone at the principal's office at school, intercepts a Nigerian scam e-mail to her principal and forwards it to her own account. What follows is a madcap sequence of events as she tries to get rich off the scheme and a freak power surge causes the money to become inaccessible to both her and the scammers, leading them to travel all the way to America and kidnap her sister in order to try to get the money back. And yes, the whole thing is just a bizarre as it sounds.

This film includes examples of the following: