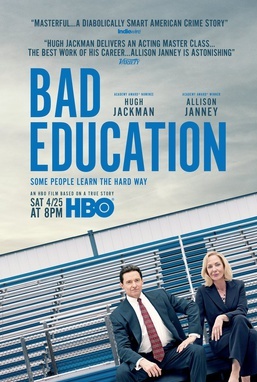 Bad Education is a 2019 film directed by Cory Finley.

It is a based-on-a-true-story dramatization of the Roslyn, NY school district embezzlement scandal. Roslyn school superintendent Frank Tassone (Hugh Jackman) is the popular leader of the district. In particular, he has built Roslyn High School up into the #4 school in the nation, a reliable supplier of students to Ivy League universities. He's handsome, well-dressed, and widely admired. He's about to start a big construction project, namely, a raised pedestrian walkway to connect the various buildings of Roslyn High.

He's so admired that when the district's business manager Pam Gluckin (Allison Janney) is caught embezzling $250,000 from school funds, Tassone is able to talk the school board into keeping the matter quiet and not going to the cops, but instead allowing Pam to resign quietly and pay back the money. Unfortunately for Tassone, however, high school junior Rachel Bhargava (Geraldine Viswanathan) is not as easy to placate. Rachel, a reporter for the Roslyn High paper, starts digging into the bids for the walkway and starts finding a lot of very fishy items in the district's expense reports, for much more money than the original $250K estimate. Those fishy items eventually implicate Tassone himself.

Ray Romano plays Bob Spicer, a member of the school board. Screenwriter Mike Makowsky was a middle school student in the Roslyn district when the scandal broke.