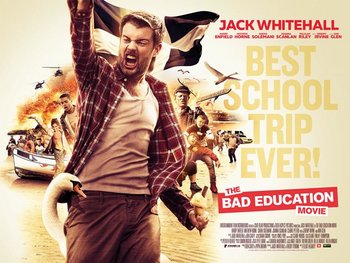 Big screen adaptation of the BBC3 sitcom starring Jack Whitehall as Alfie Wickers - the worst teacher to ever grace the British education system.

Alfie wants to take his class on a post-exam school trip to Las Vegas. But thanks to Fraser (Matthew Horne) blowing the school’s travel bursary by investing it in paintings by Rolf Harris several years before, he is forced to change his plans. So Form K are off to Cornwall and a house party hosted by Alfie’s old school friend Atticus Hoye.

But unfortunately; Joe Poulter’s overbearing mother Susan (Joanna Scanlan) is along for the ride and the fake itinerary Alfie put together for the pupils’ parents becomes a reality, with trips to the Eden Project and various historical sites on the cards. And if things weren’t bad enough, an unfinished tattoo and a chance meeting with smuggler Pasco Trevelyan (Iain Glen) leads to Alfie and his pupils unwittingly getting involved with the Cornish Liberation Army, a group of local revolutionaries ready to fight to the death for independence from the rest of the UK. Alfie wanted a memorable trip, and it certainly looks like he'll get one...