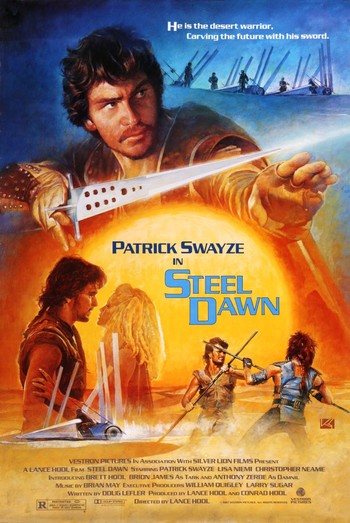 It seems that mullets are more persistent than cockroaches.
Advertisement:

Steel Dawn is an action film from the year 1987.

Set in a post-apocalyptic Desert Punk Scavenger World, the movie follows a quiet man named Nomad (Patrick Swayze), who on his travels runs on to Cord, one of his war buddies. Cord tells him he has been appointed to be the "peacemaker" to the town of Median. They are suddenly attacked by Sho and his cronies, who have been hired by Damnil to make sure that he is the only commanding presence in the area.

Cord is killed, and Nomad vows for revenge. He then sets out for Median, where he meets Determined Homesteader Kasha and her son Jux. As he becomes closer and closer to them, the day of reckoning closes in...

And if the summary doesn't make it clear, this film rips its plot from the classic western Shane.

Also not a sequel to Red Dawn (1984), despite Patrick Swayze starring in both films. If anything, it's more like Mad Max 2: The Road Warrior meets Shane, to the point of sharing the former film's composer Brian May (not to be confused with the guitarist from Queen).