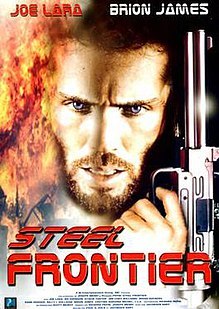 Steel Frontier is a 1995 post-apocalyptic film set in the then distant date of 2019. Staring Joe Lara as the mysterious motorcycle-riding gunslinger known as Yuma, Yuma finds himself in the town of "New Hope", which has been taken over by a group of bandits calling themselves the "United Regime", which is led by General Quantrill (played by Brion James), who is a descendant of the famous Confederate officer William Quantrill, who had left his son in charge of the town to give him some command experience. Yuma joins the group, but he soon starts pulling tricks upon the various members of the group, such as having them shoot each other while believing that they were going after rebellious townsfolk. Eventually, the gang members in town deduce that Yuma isn't actually with them, and try to kill him. However, Yuma manages to kill them, save one, Ackett (played by Bo Svenson) who goes to warn Quantrill about what happened.

Quantrill soon arrives, and engages in battle with Yuma and some of the townsfolk. Eventually, Yuma kills him, and decides to take the body in order to collect the reward on the man's head.

Basically, it's what you get when one crosses Mad Max with The Man With No Name.