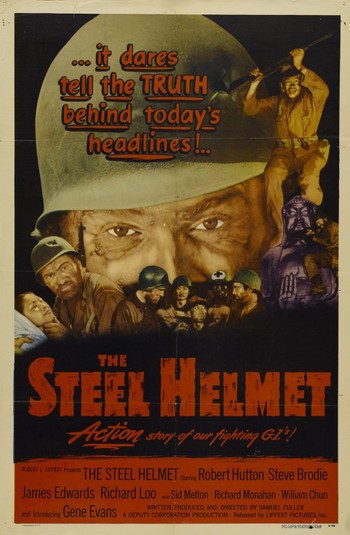 The Steel Helmet is a 1951 film directed by Samuel Fuller.

It is set in the early months of The Korean War. It opens with Sgt. Zack (Gene Evans), who is climbing his way out of a ditch. Sgt. Zack is the only survivor after his squad surrendered to the North Koreans and was promptly executed; the bullet meant for his head wound up spinning around his steel helmet and coming out the front. Sgt. Zack still has his hands bound behind him, but he is soon freed by a pre-teen South Korean boy (William Chun). The boy, whom Zack nicknames "Short Round", is a war orphan, who promptly attaches himself to Zack as a companion.

Soon Zack and Short Round stumble across Cpl. Thompson (James Edwards), a black man, and an Army medic, who is also the sole survivor of his platoon. The three of them then encounter an American patrol led by Lt. Driscoll (Steve Brodie), which is trying to find a Buddhist temple that the Army wants for an observation post. With Short Round as a guide, the patrol finds the temple and sets up the observation post. What they don't know is that a North Korean major (Harold Fong) is still hiding inside the temple.

One of the first films ever made about the Korean War, produced in October 1950 just four months after the North Korean invasion and before the Chinese intervention. Also the very first film to make reference to the internment of Japanese-Americans during World War II.

And yes, the character of "Short Round" in Indiana Jones and the Temple of Doom was a Shout-Out to the Short Round character in this movie.