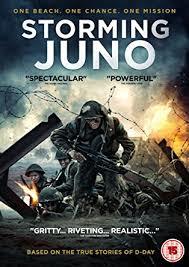 is the story of several Canadian soldiers and their roles in the Normandy Invasion.