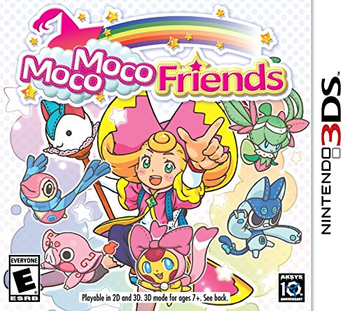 Moco Moco Friends is a 3DS RPG published by Aksys Games. It came out on November 17, 2015 in North America, and an unspecified amount of proceeds from the game went to

The game is set in Dreamtopia, a world much like ours, except it's filled with adorable, plush creatures called Plushkins. Plushkin Masters are held in high regard throughout the land. A Plushkin Master can wield magic, and use their control of the energy known as Dreamtropy in order to befriend Plushkins. Every year, numerous young girls attend the Plushkin Magic School in hopes of becoming a Plushkin Master, and someday achieving the ultimate position of the Charisma Master, the highest ranking Plushkin Master in the world.

The Plushkin Magic School has just completed its graduation ceremonies for this year. A young girl named Moco somehow scraped through her classes and graduated, although she got the lowest scores in her grade. She triumphantly returns home to Konpei Tower, where her master resides...