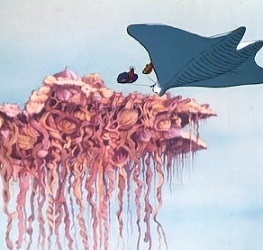 Skywhales is a 1983 animated short film created by Derek Hayes and Phil Austin. The short is a window into the daily lives of a society of alien creatures who live on a floating island in the atmosphere of a gas giant. It follows one particular alien as he heads out to help hunt the titular skywhales, which are a source of food for his people. One significant tribal custom introduced early on is the appearance of a subset of the population with dead white skin color and dark black eyes; encountering them causes the people to shield their eyes and let them pass. The reason for this becomes clear in the end...

One notable feature of the short is though the aliens speak in a fabricated language, none of it is subtitled, leaving the viewer themself to work out the finer points of what's going on.

It was shown in cinemas in the United Kingdom in 1984, playing before the film 1984. It can be found on British Animation Collection Volume 1 DVD along with a number of other animated shorts.